Last Sunday seems like a month ago! A great and full week. My daughter started a new job that she loves – I love it when good things happen for my loved ones.

I went for float #3 and I have to say it just gets better.  I had a massage as well, so I’ve been extremely relaxed! 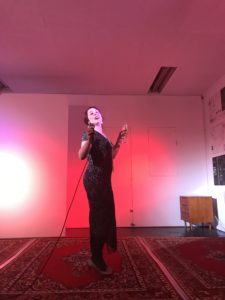 I joined the 5th birthday celebrations of the amazing Paper Dolls last night and it was laughter, fun and good company. The Paper Dolls are are an empowering dance ensemble who practice in Morwell and perform all over Gippsland. ReActivate HQ space was transformed. Here’s a pic of the delightful Poppy Playdate training us to applaud at the appropriate moment.

This is my favourite clip from 2014 #GetSunflowered season. We’ve been getting heaps of enquiries about the sunflowers – fingers crossed for next season.

This week the carpark reality set in. The posters promised 90 new carparks but the loss of trees is a sad side effect.  Here is a before and after. Fortunately it looks like the plane trees will remain, but our courtyard will be less protected and need more watering. 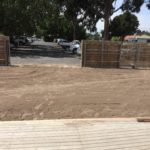 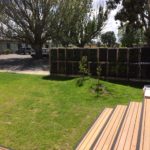 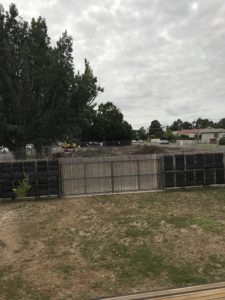 I have to wonder about carparks. I use them so before I complain, maybe it’s time to walk more.

It reminds me of the pop up park in Tarwin St. The loss of four carparks seemed enough for it’s removal.

I still love this great social media (satire) comment made by Alt_Art co-director Steph (who also started a new job this week-well done!): 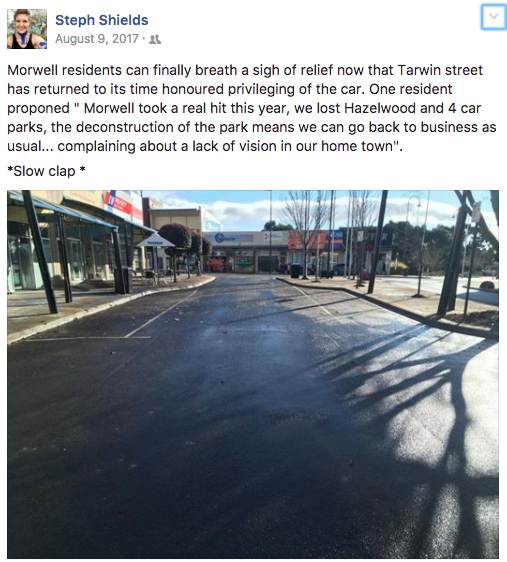 Things that make you go mmmmmm

The eclipse brought many changes and most of them were happy ones for me. The challenging ones have now transformed me and will bring the goods in the long run. The Leo eclipse was in my 8th house can you tell?

My favourite TED talk for this emotional eclipse week was:

The gift and power of emotional courage

Not much to say tonight, have ran out of time and it’s early Monday already. I’ve had a great week, family dinners, son came for a night and great news. This week I’ve enjoyed a lot of salt water. Two trips to the beach for a swim and two sessions in the floatation tank. I am a fan!

Whenever I take a drive to one of our Gippsland beaches I feel pretty blessed to live where I do. It’s an amazing drive with so many great food stops available and on the way home the smell of eucalyptus trees are the final treat of the trip.

An hour of sensory deprivation has kept me sane in this busy week. If you haven’t tried it – do!  I’m not sure if it’s the magnesium or just turning off for an hour, but it feels wonderful.

So the big eclipse on Wednesday seems to be in play, beginnings and endings. Stay calm.

In preparing for your kids to go back to school, as well as getting the ’stuff’ organised, have a think about their sleeping patterns. Make sure they get enough sleep. Start now, getting them into a routine for going back to school and getting up early. Make appointments for them at 9.00!

My nana used to put all bad behaviour down to being hungry, tired or sick. I thought she was just being kind and that it was a bit simplistic. The older I get, the more I believe she was right. Parents are often surprised when I contact them about poor performance at school and ask about their childs sleeping and eating habits or health. I have seen some real improvements in both behaviour and academic performance from parents and students just focusing on getting adequate sleep and eating breakfast and lunch.

Many young people I speak to have said they only get 3 – 4 hours sleep a night. They are up all night playing games on computers, watching TV, stressing, on MSN or studying (sure!). They say they can’t get to sleep. They are too busy, have too much to do after school. They don’t want to ’sleep their lives away’. I explain to them about sleep deficit and that they really need sleep. The sleep deficit is something I have personally experienced when my children first went to school, I would drop them off and then go back to bed and sleep all day. I thought I was depressed but really, in hindsight I was just catching up on lost sleep when they were babies!

Lately in the news I have noticed lack of sleep being linked to obesity, attention deficit disorder, diabetes and accidents. The ABC Website has this amazing list of facts about sleep. There are plenty of amazing facts and I recommend you check out the list. The ones that really struck me were:

“Seventeen hours of sustained wakefulness leads to a decrease in performance equivalent to a blood alcohol-level of 0.05%.”

“Teenagers need as much sleep as small children (about 10 hrs) while those over 65 need the least of all (about six hours). For the average adult aged 25-55, eight hours is considered optimal.”

It is difficult to make kids understand the need for sleep. I tell the boys that sleep is necessary to grow tall. I have a book “7 Habits for Highly Effective Teens” by Shaun Covey and in that there is the statement that you need to get a lot of sleep in a totally dark room to grow taller. Boys want to be tall so that can work. I will be able to use some of the new articles about lack of sleep leading to obesity also now. Some girls have mentioned that when they go on extreme diets they can’t sleep, because they are hungry – scary!

As to the how to get to sleep for kids who say they have trouble, I ask lots of questions about what they do. Often caffiene is the culprit, they drink a lot of coke or coffee. Their routines (or lack of) can make sleep difficult.  In working with parents and students we will sometimes set boundaries around what time the TV or computer must go off, with the consequence of having it removed from use, if not adhered to. I have used essential oils with my own kids and meditation tapes. I have also not woken them up and let them deal with the consequences of being late and missing out on stuff due to not being able to wake up.

I think lack of sleep is a big problem in our society. You don’t have to look very far to find someone suffering from this. Sleeping pills seem a dangerous solution. We can’t take sleep for granted. It is a sign of something not right when you can’t sleep and it needs addressing.

I am really lucky, I have no problem currently with sleep. There have been times in my life after the loss of someone I’ve loved or periods of stress, when I have had some sleepless nights, but it has fortunately never developed into a long term or ongoing problem. I have experienced on those occasions how much lack of sleep impacts upon my effectiveness and my emotional levels. I now use a meditation soundtrack to listen to every night and it works well. There are plenty on the market. If you want to look at this in a more entertaining, yet still thoroughly informative way Craig Harper’s: Sleeping Ugly, is a great post on this topic.

Get latest posts emailed to you